Please read Limited Warranty and General Warnings and Cautions prior to operating the SLICE-DCC.

The SLICE-DCC Current Controller is intended for driving laser diodes. When using lasers particular care must be given to avoid exposure hazards. 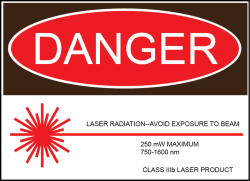 The SLICE-DCC is a low-noise, economical current controller (see figure 1). It serves as a low-noise current source providing up to 2 A. It is configured to work with a grounded cathode in either a constant current or a constant power mode. Note: All modules designed to be operated in a laboratory environment.

The SLICE-DCC will accept input line voltages within the ranges shown in table 3.


The SLICE-DCC is designed to drive, among other devices, laser diodes, quantum cascade lasers, and semiconductor amplifiers. In order to be in US FDA compliance for driving lasers:

As with any diode laser and controller, improper usage can cause irreparable damage to the diode.

An image of the front panel is shown in figure 2. The functions and connections are as follows: 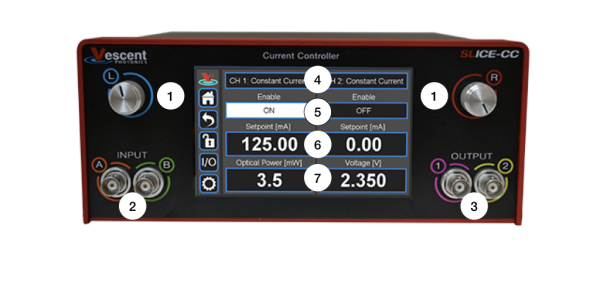 An image of the rear panel is shown in figure 3. The functions and connections are as follows: 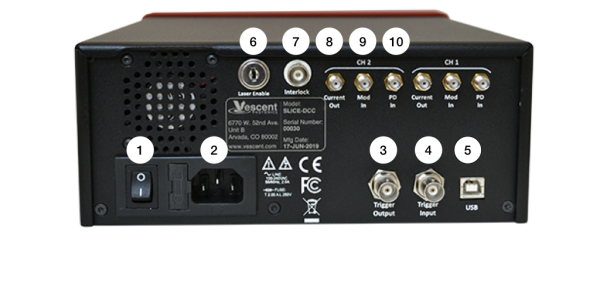 Getting Familiar with the SLICE-DCC

When presented with a given view, it is possible to select the functionality or edit the values in a field bordered in blue. When a particular field is actively being edited, its border will change to yellow. The Home Screen of the SLICE-DCC is shown in figure 4 and is reached by clicking the home button (figure 5) in the upper left corner of the touch screen. From the Home screen, summary control over the two channels is possible, including setting Iset or Pset,From the Home screen, you can edit the control parameters for each channel.

In general, the status displayed in an editable field is the current status (not the result of touching the button). Touch the field to select a new value/status. For instance, in figure 4 both channels are in stand by. Touching the OFF button will initiate current delivery to the given channel. 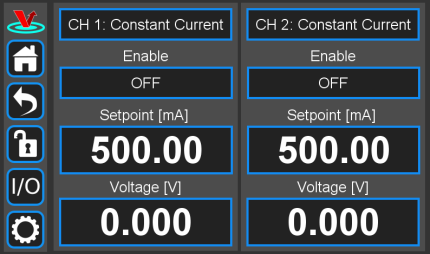 On the left edge of the screen is the Control Bar. At any given time, these buttons will have the following effect.

Fig. 6: Back button Returns to previous screen. Changes will be lost if not accepted before using the Back button.

Fig. 7: Lock button (shown in unlocked mode) Locks out further modification of parameters. Touch to lock or unlock parameter entry. When in lock mode, it is still possible to toggle the current on and off, but it will not be possible to change the set point or other operation parameters.

In most instances, there are two methods for entering parameter values: the physical rotary knobs on the front panel and the pop-up keypad on the touch screen. When using the knobs to change the value of a parameter, changes take effect immediately. When using the keypad, changes do not take effect until the enter key is touched.

In order to afford maximum resolution, the least significant digit will not necessarily change to precisely your target value and will be coerced to the nearest acceptable value, which is limited by the digitization scheme for the set point. For instance, you may select a set point current of 151.13 mA, but the closest allowed digitized value may be 151.14 mA.

If you touch an editable field for a brief moment, the border of the field will change from blue to yellow and a cursor will appear under one of the digits of the parameter value (figure 10). By turning the right knob, it is possible to increase (cw) or decrease (ccw) the value of the underlined digit. Turning the left knob will change which digit is editable (cw to move to the right and ccw to move to the left). Changes made with the rotary knobs take effect immediately. 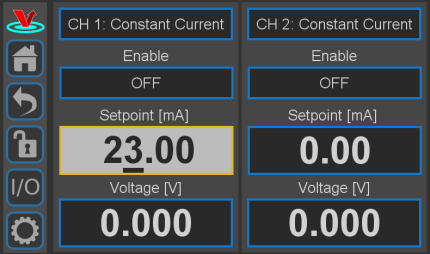 If you touch and hold an editable field such as the current set point, a numeric keypad will appear as seen in figure 11. You can enter in the full value of the desired parameter with this keypad. Changes entered through the keypad are not enacted until the Enter key is touched. 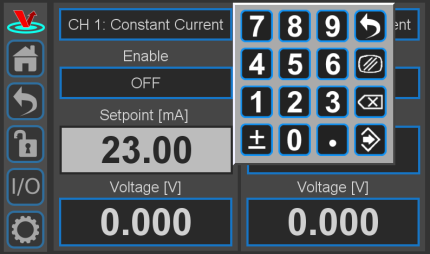 The action initiated by each button of the keypad is described below. 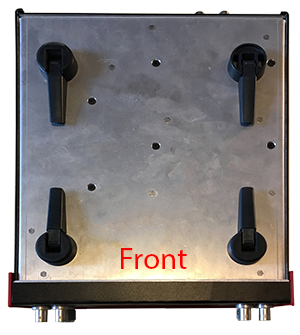 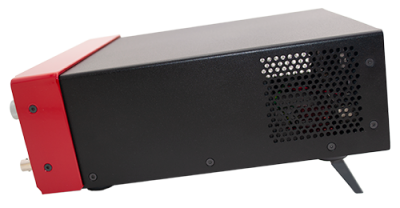 Fig. 17: Side view of SLICE-DCC configured for viewing from below 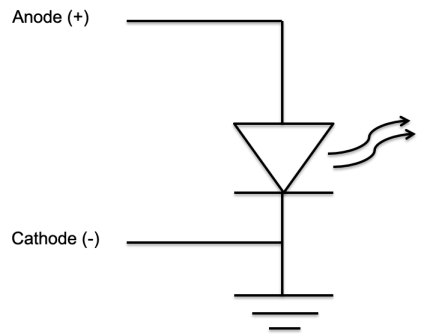 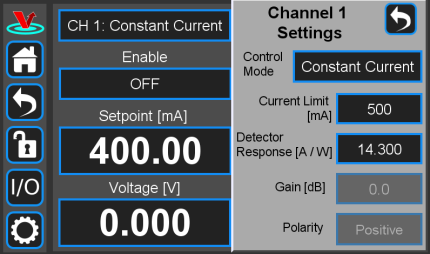 If the channel is in Constant Power mode, you will be presented with the window seen in figure 21. 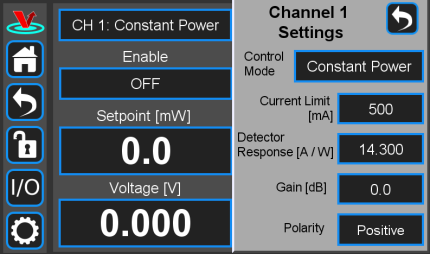 Touching the Window labeled Control Mode will allow you to toggle the channel back & forth between Constant Current and Constant Power modes as seen in figure 22. 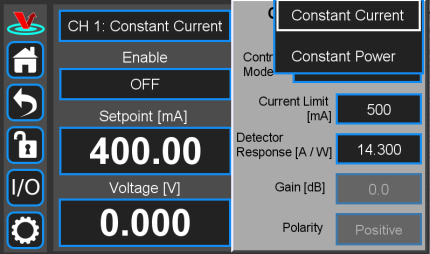 The user can set a maximum deliverable current so as not to exceed the rated maximum for their device. From the Home screen, touch the window labelled either CH X Constant Current or CH X Constant Power. Depending on the operation mode, you will be presented with either figure 20 or figure 21. Touch the Current Limit window and enter the maximum allowed current (in mA) as in figure 23. 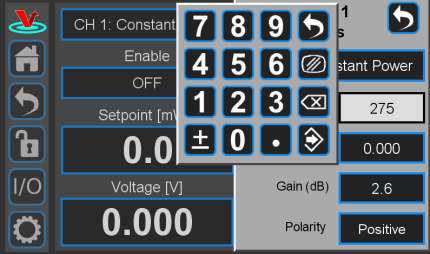 To set the current set point from the home screen, touch the Set point window for the desired channel. A long touch will cause a keypad to appear (figure 24). Enter desired value and touch the accept button.

A short touch will highlight the Setpoint window in yellow (figure 10). Use rotary knobs to select digit to edit (left knob) and value for digit (right knob).

It is possible to adjust the Power Setpoint when the system is either ON or in Standby mode. 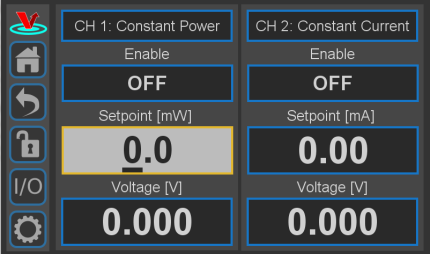 When the blue window labeled Enable reads OFF, the system is in standby mode and no current is delivered. Briefly touching this window will, after a 5 s pause during which a warning light will flash, cause current to begin to flow and the window will read ON.

On the rear panel of the SLICE-DCC is an SMA input for servoing or modulating the current output. (figure 3, item 9). The transfer function for this input depends on the current capacity (see table 4). The input range is ±10 V. The current can be modulated over the full range of current except for the 2,000 mA model which can only swing ±50 mA. The 3-dB bandwidth of this modulation input is DC to 1 MHz.

It is also possible to introduce a modulation/control signal from the front-panel input BNC. Only one input port can be active at a time.

In Constant Power mode, the SLICE-DCC accepts a current input signal from the output of a photodiode (often internally mounted with the diode laser). This signal is conditioned by a trans-impedance amplifier and used as an error signal. It is further processed by a loop filter to provide a correction signal to the current to maintain constant power.

The SLICE-DCC has two programmable inputs (labelled A & B) and two programmable outputs (labelled 1 and 2) on the front panel. It also has a rear panel trigger input and trigger output. Touching the I/O icon on the control bar will open a screen similar to that seen in figure 28, From here, it is possible to assign control information input to the two inputs and system performance data to the two outputs, 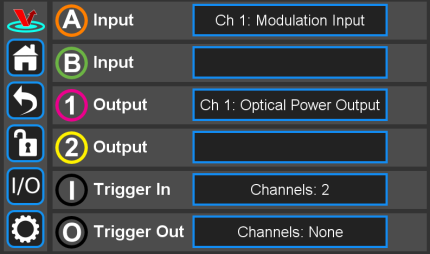 These front-panel inputs and outputs are mainly intended for monitoring the performance of the SLICE-DCC and as such have slower, noisier components than the rear-panel connections.

From figure 28, if one touches either the A or B input window, the choices for input for that channel are presented (figure 29). 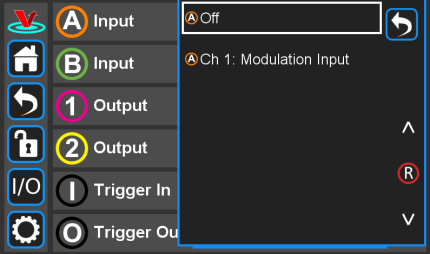 The only input option is a modulation signal. The SLICE-DCC can respond to a modulation or control signal over a bandwidth of DC to 1 MHz. Only one of the two modulation input ports (rear-panel SMA, figure 3, item 9 or front-panel BNC, figure 2, item 2) can be active at any given time. Activating the front-panel input via the screen in figure 29 automatically disconnects the rear-panel input.

The depth and index of modulation varies depending on the current capacity of the particular SLICE-DCC unit. See table 4.

From figure 28, if one touches either the 1 or 2 output window, the choices for output for that channel are presented (figure 30). 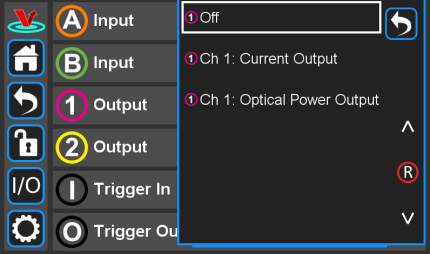 One can choose to monitor the current output and/or the optical power as measured at the photodiode input.

External control of the SLICE-DCC is accomplished via a TTL trigger.10) 0 to 0.8 V TTL is low and 2 to VCC is TTL high. 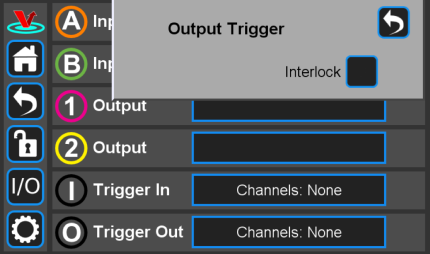 The input trigger can be used to turn on or off the current for either or both channels. From any screen, touch I/O > Trigger In. You will be presented with the window in figure 32. Select which channels you wish to control with the incoming trigger. In figure 33, current to CH 2 will be disabled if the Trigger In goes high. 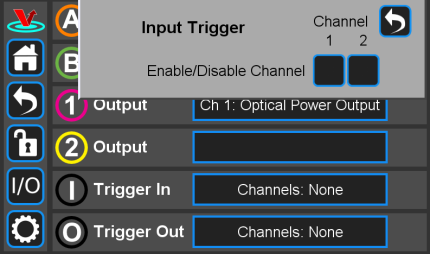 Fig. 32: Programming the rear-panel trigger in 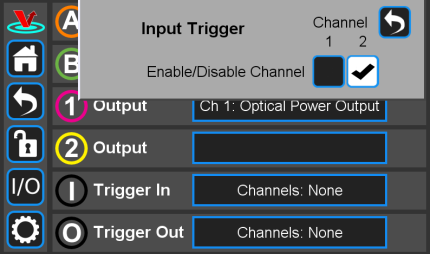 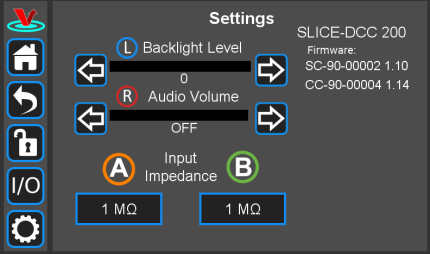 From this screen, adjustments to the brightness of the screen and the volume of the audio feedback can be made.

Change the input impedance of the two front-panel input ports. Select either 50 Ω or 1 MΩ.

If accessed through a PC Host GUI, the Settings screen (figure 35) also has the ability to assign the COM port for the device. If viewed through the GUI, there are no brightness or volume controls as these should be set on the PC directly. 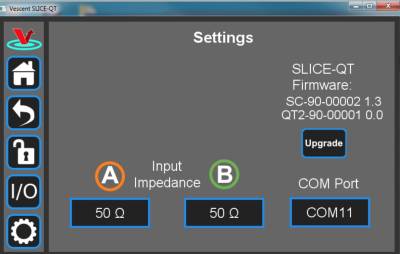 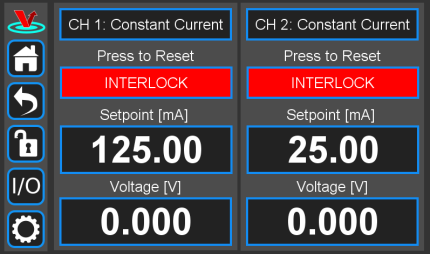 If the SLICE-DCC attempts to deliver current, but is unable to do so, it assumes an open circuit fault. The Enable window on the Home screen for that channel will flash red with the warning “Open Circuit/Over Voltage” (figure 37). 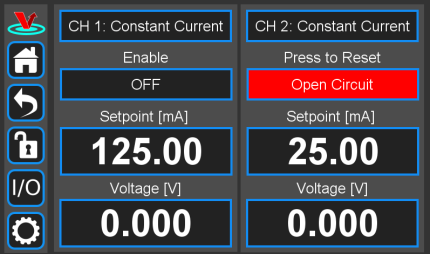 It is possible to control the SLICE-DCC from a Windows®-based PC using the GUI written for this purpose. In order to use the GUI, you must first download the latest version, connect the PC to the SLICE-DCC, and assign a COM port to the SLICE-DCC. The following describes the steps involved.

The GUI should now actively control the SLICE-DCC. You should only have to do the above steps once from a given PC. After assigning the COM port, the system will recognize the device in the future (unless you reassign the COM port to another device).

There are no user-serviceable parts inside this instrument. Refer all repairs to the manufacturer. Work performed by persons not authorized by Vescent Photonics may void the warranty.