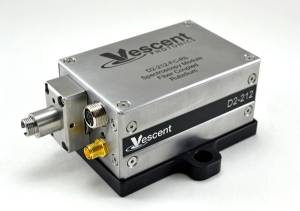 Please read Limited Warranty and General Warnings and Cautions prior to operating the D2-212.

The D2-212 saturated absorption spectroscopy module provides error signals derived from saturated absorption spectroscopy of atomic rubidium, cesium, or potassium. It contains a vapor cell, internal temperature controller, a single photodetector, and optics. Temperature control stabilizes the number density of atoms in the cell.The photodiode output is shot-noise limited out to greater than 5 MHz for photocurrents of 100 μA and above. The high bandwidth of the feedback enables tight solid locking that is immune to vibrations and shock. The D2-212 is powered by a cable that plugs into the power connectors on any D2 series electronics module or into an ICE-PB1 board, depending on which system you purchased.

Note: All modules designed to be operated in laboratory environment.

Input light passes through an adjustable λ/2 waveplate and polarizing beamsplitter (PBS) that directs a user-controlled portion of the beam to the vapor cell. The beam is then reflected back through the vapor in a counter-propagating configuration and back to the PBS where it is directed onto the photodetector.

The beam diameters were designed to provide enough photocurrent (~50-100μA) to give shot-noise-limited performance out to 5 MHz while limiting saturation broadening. For Vescent's D2-100-DBR lasers, the bandwidth is useful to provide for tight and stable locking by feedback to injection current. 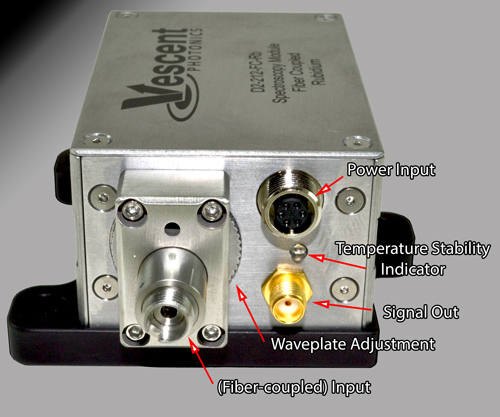 Power from the D2-005 Power Supply, ICE-PB1 Power Buss, or other power supply are made through a Hirose 6-pin circular connector (HR10A-7TR-6SA) shown in figure 1 and figure 2. The pin definitions (pin numbers are marked on the connectors) are listed in table 1.

The photodiode signal is output through an SMA connector below the power connector shown in figure 1. Connect to ERROR INPUT on the Laser Servo. The output of the photodetector circuitry is designed to drive signal into a 50Ω terminated load. The drive strength of this output allows a maximum DC output voltage of 5V. Applying too much light to the module such that the output DC level exceeds 5V will cause saturation of the circuitry. It is recommended to adjust the input light power using the λ/2 waveplate attenuator such that the maximum DC level on the this output is about 3V or less.

The master TEC setpoint which controls the vapor pressure of the cell is controlled by the trimpot labeled “Temp Set” in figure 3. Adjusting this trimpot will set the master TEC operating temperature. The slave TEC, which heats the vapor cell's windows will track changes to the master's setpoint, remaining at the offset set by the Window Offset Adj trimpot described below. 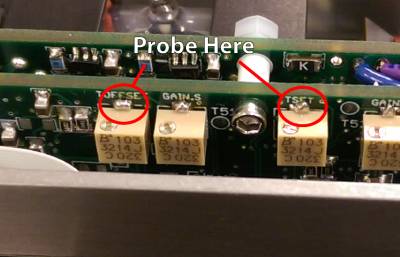 Fig. 4: Locations to probe with voltmeter while adjusting trimpots.

The extent of the trim range can be determined by probing the location shown in figure 4 with a voltmeter referenced to case ground (the outer shell of the SMA connector is a good reference point). Probing this location gives the wiper voltage of the trimpot which corresponds to temperature as shown in the table below. This 10-turn trim pot sets temperature from 15°C (fully CCW) to 75°C (10 turns CW). The 5-turn point is approximately 42°C. The following table gives approximate temperature settings for the three available alkali options:

This trimpot is located to the right of the “Temp Set” trimpot shown in figure 3. This controls the proportional gain of the master TEC's PID control loop. It is factory set for loop stability, but it may be adjusted if there are stability issues. Turning this CW increases gain, while CCW decreases gain. It's setpoint may be recorded by using an Ohm-meter to measure the resistance from the trimpot's wiper lug (similiar to the probe points shown in figure 4 to case ground while the D2-212 module is unpowered. The factory setting is generally about 2kΩ to ground.

This trimpot is located to the right of the “Window Offset” trimpot shown in figure 3. This controls the proportional gain of the slave TEC's PID control loop. It is factory set for loop stability, but it may be adjusted if there are stability issues. Turning this CW increases gain, while CCW decreases gain. It's setpoint may be recorded by using an Ohm-meter to measure the resistance from the trimpot's wiper lug (similiar to the probe points shown in figure 4 to case ground while the D2-212 module is unpowered. The factory setting is generally about 2kΩ to ground.

A waveplate attached to the front plate by magnets (shown in figure 1) can be used to attenuate incoming light by rotating the knurled ring. Once set, the waveplate can be locked in place using the set screw accessed in the small hole above the fiber input.

Below, figure 5 is a scope trace representative of spectroscopy for 87Rb. The yellow trace is taken from the Error Input monitor of the servo. The green trace is the derivative of the yellow sweep. The two hyperfine transitions are marked with vertical cursors. 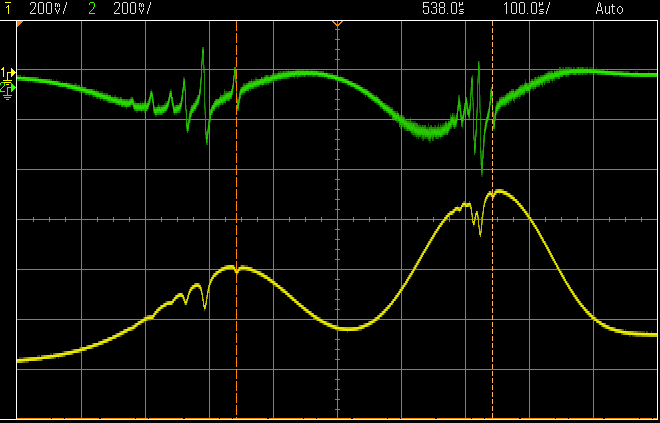