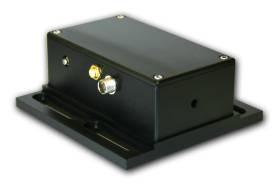 Please read Limited Warranty and General Warnings and Cautions prior to operating the D2-110.

The spectroscopy module provides saturated absorption spectroscopy to atomic rubidium. It contains a rubidium absorption cell, TEC, balanced photodetector, and associated mirrors and beamsplitting optics. Nominally, it takes two 1% samples from the input beam. Temperature control stabilizes the number density of atoms in the cell, and a balanced photodetection circuit compensates for intensity drifts giving stable control over the lock point for side locking applications. Two beamsteering adjustments are provided for optimizing overlap of the counter-propagating beams, and positioning on the signal photodiode. The photodiode output is shot-noise limited out to ~12 MHz for photocurrents of 50 A and above. The high bandwidth of the feedback enables tight solid locking that is immune to vibrations and shock.

Note: The spectroscopy module should not be placed closer than 3“ from the Laser module because the magnetic fields from the isolator can interfere with the hyperfine transitions causing lock instability and dc shifts. 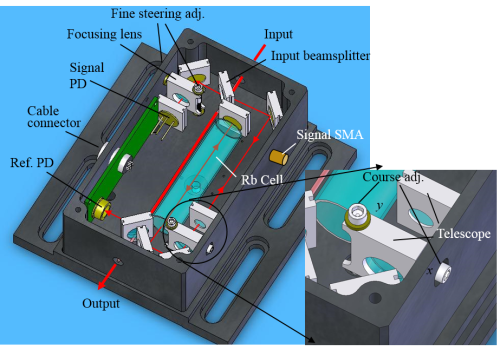 Power and temperature control signals from the Laser Servo are made through an 8-pin circular connector. The pin definitions (pin numbers are marked on the connectors) are listed below, where Rth and Rth_Rtn are the two ends of the thermistor.

To minimize electro-magnetic interference, the photodiode signal to the Laser Servo is output through an SMA connector.

The spectroscopy module contains a 3x Galilean beam expander. The output lens is mounted on a spring-loaded mount with 2-56 screws that serve as a course adjustment for the beam positioning onto the signal photodiode and also to control the retro reflection of the reflecting mirror (figure 1).

The spectroscopy module contains a focusing lens for the signal photodiode on a spring-loaded mount with 2-56 screws for fine adjustment of the beam onto the photodiode (figure 1).

The spectroscopy module is shipped factory aligned and should need only minor adjustment. However, it is not uncommon that alignment is required after initial set up. To realign, follow this procedure: