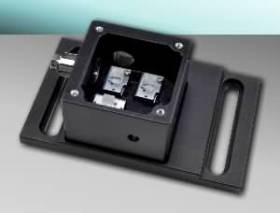 Please read Limited Warranty and General Warnings and Cautions prior to operating the D2-150.

The heterodyne module is designed to provide a fiber coupled heterodyne beat note formed by picking-off a small proportion of light from each of two laser beams. Light is coupled into a multi-mode fiber. A second output port can be used to overlap the two picked-off beams. The light entering the module should be horizontally polarized for best results.

Once the module has been placed such that high power beams are well centered on the input and output apertures, the pick-off beams can be aligned. First, the upper right beam cube should be adjusted horizontally and vertically to maximize the coupling of the beam shown in green into the multi-mode fiber through the fiber coupler shown on the left of the module. These adjustments can be made with a 0.050“ Allen wrench. The horizontal adjustment is made by turning the black screw with a cone-shaped head to the right of the metal plate that the beam cube rests on. The vertical adjustment can be made with the screw inserted into the same metal plate. Note that it is important to use the screws provided with the module, as replacing the screws with longer ones can cause permanent distortion of the metal plate.

After the laser beam shown in green is adjusted, the picked-off light shown in red should be adjusted to overlap with the picked-off light shown in green. This beam can be adjusted using horizontally and vertically using the beam cubes shown on the lower and upper left corners of the module. The beams should appear to overlap both close to the module and far from it when the beams are seen through the large unused fiber coupling port. Generally, the overlap of the beams in the near field should be achieved by adjusting the beam cube in the lower left of the picture and the overlap in the far field should be achieved with the beam cube in the upper left of the picture. Iterating between adjusting the beams in the near field and far field will yield the best beam overlap. Once the beams are well overlapped, the fiber output can be measured on a high-speed photodetector and the resulting beat note can be measured with a spectrum analyzer. Additional small adjustments to the beams may be necessary to improve the strength of the beat note.

The procedure outlined above should work to align the module, but if difficulties are encountered another alignment procedure is possible with a fiber coupled laser such as the laser pens that are used to check fiber continuity and align light into fibers. In this procedure, light should travel the reverse direction through the fiber so that the light is output into the module. The beams should then be adjusted such that this reverse-coupled light overlaps well with the two laser beams entering the module.