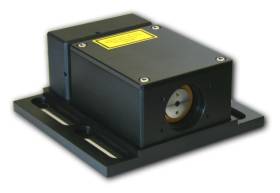 Please read Limited Warranty and General Warnings and Cautions prior to operating the D2-100-DBR.

The DBR laser module is comprised of a distributed feedback (DBR) laser diode in a precision temperature-controlled housing with beam conditioning optics and an optical isolator. DBR laser diodes are fabricated with the feedback grating patterned directly over the gain section of the diode. They are highly immune to vibrations and by virtue of a very short cavity (~ 1 mm), they can be current tuned over more than 50 GHz. The result is a robust laser capable of very fast servo control for easy locking to atomic transitions. The module contains no moving parts or piezo-electrics and is therefore inherently robust and rugged.

The DBR laser is collimated by a 0.68 NA lens mounted to a movable plate for pointing adjustments. The module also comes with a 35 dB optical isolator and a pair of anamorphic prisms. (Note that prior to fiber coupling we recommend a second stage of isolation.)

The DBR laser chip is contained in a thermal package allowing temperature control between 15° to 30° C. Vescent can replace the package if it exceeds its lifetime. 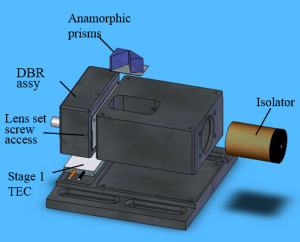 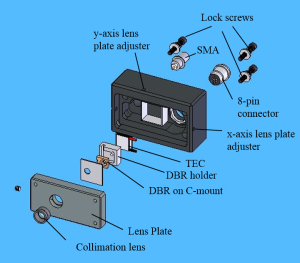 The laser should never be operated at a temperature below the dew point temperature for your laboratory conditions. Condensation can form on the laser chip and/or mounting hardware resulting irreparable damage.

The connections to the TECs and thermistors are made to an 8-pin Hirose connector (see table 2 for identity of connectors). The pin definitions are:

NOTE: Earlier models use a push-pull connector for the 8-pin connector to the DBR module. To remove take care to apply opposition forces with the thumb and forefinger knuckles against the housing. Excessive force could displace the output beam and require realignment.

Always make sure to make a snug connection between the D2-100 and the current-carrying SMA cable, and between the cable and the laser controller.