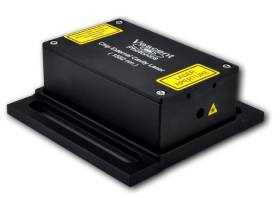 Please read Limited Warranty and General Warnings and Cautions prior to operating the D2-100-CECL.

The CECL laser modules is comprised of a fabry-perot (FP) laser diode and grating in a precision temperature-controller housing. The grating is placed close (<1 cm) to the FP laser diode, resulting in a short cavity capable of GHz mode-hop free injection current tuning. The grating is at a fixed position, resulting in stiff design that is highly immune to mechanical vibration. Large frequency tuning is achieved via temperature. The result is a robust laser capable of very fast servo control for easy locking to spectroscopic transitions. The module contains no moving parts or piezo-electrics and is therefore inherently robust and rugged. The CECL laser is collimated by a 0.60 NA lens. Two mirrors control the positioning of the output laser beam.

Laser diodes all have astigmatism, which means the horizontal and vertical axes have different foci. Vescent uses a powerful asphere with a short focal length and an anamorphic prism pair to create a small diameter circular beam. This reduces the costs of the isolator and other downstream modules by reducing the clear aperture requirements. While the aspheres and anamorphic prisms produce a circular beam, astigmatism dictates that a single lens will not simultaneously collimate both orthogonal axes of the beam with the result that in the far field the beam is again elliptical.

The far-field pattern is the most important for ascertaining the quality of the diode output. The near-field pattern often shows stray light from the diode waveguide and ASE that doesn't propagate as part of the primary beam. However, aberrations and beam clipping due to an insufficient lens NA will show up as fringes-on the far field pattern. Vescent has taken care in the design of the laser module to keep aberrations and clipping to a minimum, resulting in a clean beam in the far field.

The connections to the TECs and thermisters are made to an 8-pin circular connector. The pin definitions are: